In the event of a refrigerant leak, the new system isolates the specific section of refrigerant pipework containing the leak, enabling the rest of the system to continue functioning as normal. 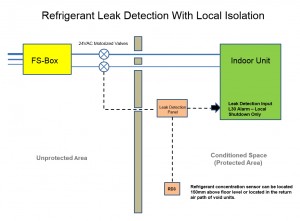 Conventional approaches shut down the entire system in the event of a leak, impacting occupants throughout a building until the source of the leak can be identified and repaired. The new technology means that only the immediate area served by the compromised circuit suffers loss of service.

David Dunn, General Manager, says: “This technology is a major step forward and extremely useful for applications such as hotels and multi-tenanted buildings. It means that, in the unlikely event of a leak, those areas unaffected can continue to function as normal and receive cooling and heating as required.”

Toshiba’s new refrigerant detection and isolation technology uses a number of separate isolation cells throughout a building, consisting of an RBC-RD3 refrigerant concentration sensor, a pair of motorised isolation valves, and an RBC-RD7 control box.

Vent-Axia Leads the Way in Innovation at industry awards