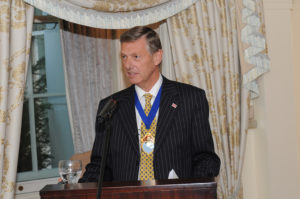 The Association said he was “an absolute gentleman and unifying figure, who leaves a huge legacy and whose death will be mourned right across the building engineering sector”.

A hugely popular and widely respected doyen of the building services industry, Graham was one of the few people to have served as President of both the sector’s main contractor body BESA (then the HVCA) and its chartered institution CIBSE. He was also chairman of the industry’s research organisation BSRIA and was appointed an Officer of the Order of the British Empire (OBE) in 2012 for his services to building engineering.

“The world of building services has lost one of its most influential and best loved figures,” said current BESA President Tim Hopkinson. “He was a wonderful engineer and business leader, but arguably his greatest achievement was his ability to bring people together and to promote collaboration in a notoriously fragmented industry.

“He said himself that the greatest highlights of his career were related to people rather than buildings and that he was inspired by his father’s example to always treat people ethically and with respect. As a result, I can’t think of anyone who made so many genuine friends through their business dealings.”

Former HVCA chief executive Robert Higgs OBE added that it was not “only that Graham’s contribution to the industry was so immense, it is as much his style, personality and generosity of spirit that will be remembered.

“He was always there when needed; he never said ‘no’ when asked for help. He was structured, diplomatic, thoughtful and thorough…. as he would guide us gently towards solutions to what seemed like impossible challenges.”

Throughout his 50-year career, Graham was a great champion of young people, devoting much of his time to mentoring students, particularly during his 15 years serving as a STEM (science, technology, engineering and mathematics) Ambassador.

He joined the industry in 1962 when he began studying for a Higher National Diploma in environmental engineering at the National College of Heating, Ventilating, Refrigeration and Fan Engineering. Last year he received an honorary doctorate from the college in its current guise as the School of the Built Environment and Architecture – part of London South Bank University where he was also a visiting professor.

His first employer was J. Jeffreys (later to become part of Balfour Beatty) where he rose to the position of senior design engineer before leaving to join his father’s firm the mechanical services contractor A G Manly & Co as contracts director. He took over as managing director in 1982.

A G Manly was acquired by Gratte Brothers in 2000 and Graham transferred to the new company as business development director with special responsibility for technical innovation.

He was chairman of BSRIA in 1991/93; President of CIBSE in 2004/05; and President of the HVCA in 2009/10. He was also a director of Summit Skills and chair of the National Skills Academy for Environmental Technologies.

Graham’s father Alfred also served as President of the HVCA in 1978/9. Alfred’s generous legacy led to the creation of the Manly Trust that continues to provide financial support to a wide range of engineering, educational and youth charities across the South East and is chaired by Graham’s wife Margaret.