Presentation of awards to six of the industry’s most talented young people took place at a luncheon which followed this year’s annual general meetings of the specialist groups of the Building & Engineering Services Association. 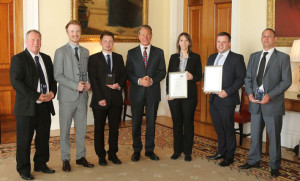 The Award for Excellence in refrigeration and air conditioning – presented in memory of Harry Decker – went to Robert Turner of Crowther & Shaw, in Huddersfield, West Yorkshire.

Also presented during the event, which was held at Trinity House in the City of London, were the Alfred Manly Management Award – which celebrates the achievements of young engineers who have been judged to be capable of progressing to a senior management role – to Shane Trevitt of national contractor NG Bailey and the Ann Noblett Professional Engineer of the Year Award – which is open to individuals who are working towards membership of an appropriate chartered professional body – to Kayley Lockhead, also of NG Bailey.

The awards were presented by Cabinet minister-turned-broadcaster Michael Portillo, who was guest speaker at the event.

During the Ductwork Group annual general meeting, Tim Hopkinson of Hargreaves was elected chairman in succession to Bob Lane, of Roperhurst, and Joanna Robinson, of Mansfield Pollard, was elected vice chairman.

In his keynote address, B&ES president Andy Sneyd reminded his audience of “the pressing need not only to cope with change, but to embrace it”, and to be “prepared at all times to keep up with technological innovation, and to adapt to the developing demands of the supply chain”.

And he added that it was the over-riding aim and purpose of the Association to ensure that its members were ever open to “new ideas and new ways of working” and that the expertise and professionalism they brought to the construction process met “the increasing demands and expectations of clients”.

“The recently-formed group strategic and operational board is ensuring that the advice, guidance and support we provide to members remains relevant to their business needs – and our Competence Assessment Scheme is subject to ongoing review, to ensure not only that its criteria remain appropriately rigorous, but that they reflect all aspects of industry best practice,” the president pointed out.

Among the recent achievements of the specialist groups, Mr Sneyd highlighted:
– the launch of a new edition of its Specification for Sheet Metal Ductwork (DW144);
– the development of revised qualifications and training standards for the ductwork, service and maintenance and refrigeration and air conditioning sectors;
– the formation of an Indoor Air Quality Strategy Team to identify measures that would significantly improve the environment in a broad range of buildings;
– action by members of the Refrigeration Air Conditioning and Heat Pump Group aimed at addressing the “shamefully low levels of compliance” with the Government’s air conditioning energy assessments and Part L of the Building Regulations; and
– the participation of the Heating & Plumbing Services Group in a commission of enquiry into sustainable construction carried out by the All Party Parliamentary Group for Excellence in the Built Environment.

“To all of those individuals involved in taking forward these and many other initiatives, I offer my sincere thanks on behalf of the Association as a whole,” the president concluded.