Being creative and compliant 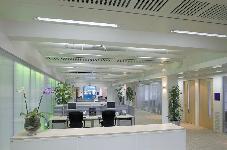 One of the gripes that’s regularly heard when the topic of office lighting design comes up for discussion is that the CIBSE Lighting Guides LG3(a) and LG7 (2004) inhibit the creativity of the lighting designer. This may well be true in a minority of cases where a lighting designer is actually working on the project, but for the vast majority of commercial office lighting schemes where this is not the case, LG7 is a useful tool for ensuring that people who work in offices reap the benefit of good, effective lighting in the workplace.

Good lighting has an important role to play in the workplace. To begin with, a well-designed lighting scheme can help provide a comfortable working environment – and a comfortable working environment can ensure a healthy level of productivity. This is not to forget the other benefits such as energy efficiency and the rental value a good lighting scheme can add to a building. So how can LG3a and LG7 make a contribution to these objectives?

There is a good deal of confusion surrounding the use of both standards so it is worth clarifying the situation: firstly, LG3 relates to the visual environment for display screen use – this could be anywhere that VDT’s and PC monitors are in operation – not just offices. In 2001 CIBSE introduced an addendum to LG3, the reason for this was that a small section in the guidance with regard to cut-off control was being adopted as compliance with the standard. In practical terms this meant an awful lot of schemes solely using Category 2 luminaires as a way to comply with LG3. Clearly, just using a Cat2 luminaire was never meant to ensure compliance. For this reason an addendum was introduced that addressed several issues that had arisen since the introduction of LG3 including; the changes in screen and software technology, cut-off control guidelines, ceiling and wall illumination, as well as the role of common sense – all factors which can play a key role in designing a successful office lighting scheme.

In contrast, LG7 (2004) is a specific lighting guidance for offices that replaces the old LG7 that dates from 1993. The need for the update was largely due to the fact that design trends have moved on and to place more emphasis on the visual environment. It was recognised that solely using numerical criteria to define what constitutes a pleasantly lit space was not possible as so much depends on room size, décor, layout and other factors. It also makes clear that the recommendation for ceiling illuminance to be around 30% of the average working plane illuminance was meant to achieve lit spaces that are pleasant to occupy – not just as a criteria for pass or fail. Taken as a whole LG7 lays down good practice, advice and standards for office lighting design whilst also putting this ‘flesh on the bones’ of the LG3 Addendum, so to speak.

As a manufacturer it is important to develop a range of office luminaires that can achieve this good illuminance balance – whether they are direct, indirect or a combination of the two. The benefits of the combined approach is that you achieve healthy task lighting levels and avoid the ceiling appearing dark relative to the room. An example of this can be seen at the DVLA in Swansea where a fully compliant LG3a lighting scheme has been achieved.

The office space in Block C and D at the DVLA Swansea Vale campus has recently been refurbished and M&E Consultant WSP Group of Bristol was tasked with providing a suitable LG3a lighting scheme. With a good deal of LG3a compliant luminaire options to chose from, WSP chose a novel approach to whittle down the candidates by creating a test environment. Several luminaires were installed in a working office and then a judgement taken about the performance of each luminaire based on how it worked in purely practical terms alongside how it fitted in with the overall design strategy.

The resultant scheme achieves an office environment that has been liberated from the poor light distribution and oppressive shadow pattern of old. The direct/indirect luminaire design incorporates a parabolic micro-louvre set in the perforated primary reflector to create a balance of direct light combined with a wide spread uplight element. The luminaire includes an attractive, low glare reeded matt aluminium gull-wing reflector for excellent vertical light control.

A major lighting scheme that demonstrates the wide range of performance benefits that Ridi luminaires can deliver in the commercial office environment has recently been completed at the newly refurbished Faraday Building in the City of London.

The Faraday Building, a monumental Victorian structure in EC4, and once the hub of Britain’s telephone network, is now home to BT Wholesale – the arm of the BT Group that provides network services and solutions to communication companies throughout the UK. Around 5,000m² of floor space have been completely refurbished. Previously used to house cumbersome exchange equipment for BT. The Bristol office of Parson’s Brinkerhoff, working alongside London-based architect AJMK, was set the challenging task of creating a New York loft-style interior. The value of the lighting installation was approximately £500K on a total spend of around £11m.

The brief was to provide DSE compliant lighting in the office areas, which needed to be incorporated into the mechanical chilled beam system. The look and feel of the office would be more industrial, with all mechanical and electrical services exposed to view. The fluorescent lighting would use full spectrum lamps and polarising filters to boost the attitude and performance of the people in the space. The lighting scheme was designed to optimise the use of the ambient daylight by the use of dimmable digital ballasts linked to light sensors and presence detectors.

The open plan office areas used recessed T5 luminaires flush mounted into the suspended chilled beam panels. The luminaires had a linear slot at the back of the fitting to allow a component of upward light to illuminate the soffit behind the chilled beam panel and eliminate dark ceiling effect. The circulation areas were treated differently using a combination of linear fluorescent luminaires and LV downlighters recessed into a Makrolon tray system to add sparkle and interest to the space. The office was zoned so that zones switched out after a predetermined period when no presence was detected in the zone or in the adjacent zone. Circulation area lighting remained on a floor if presence was detected in any zone on that floor.

Ridi were able to produce a solution using one single 54 watt T5 lamp in each of the four suspended panels of the chilled beam system. Virtual daylight lamps were used with a polarising sleeve to reduce glare. The emergency lighting was incorporated in the general lighting using separate three hour emergency battery packs. The T5 lamps provided an illumination level of approximately 80 lumens/watt which was an important consideration to reduce the heating load on the chilled beam air conditioning system. Also the optimum energy savings were possible using day linked light sensors and presence detection.

Eddy Mealey of Parson’s Brinkerhoff explains: “The lighting in the board room was designed to provide a solution suitable for video conferencing. There was a combination of low voltage downlighters and recessed fluorescent lighting wired to allow the maximum flexibility to create the different scenes required by the Audio Visual consultants. Ridi was chosen because of the quality of the luminaires, and the previous experience it had in integrating lighting within chilled beam air conditioning systems.”