The winners of the 2017 Building Controls Industry Association (BCIA) Awards were announced at the prestigious ceremony and gala dinner on 11 May 2017 at the Hilton Metropole, Birmingham. 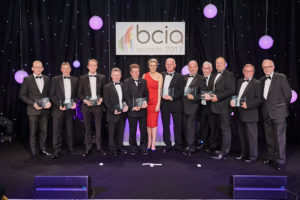 This year’s BCIA Awards, hosted by BBC broadcaster, Steph McGovern saw the best of the best recognised and rewarded for showing true excellence in the building controls industry.

The winner of Independent Building Controls & BEMS Installer of the Year was Global Associates, whose innovation and commitment to client satisfaction saw them stand out in this category.

BG Energy Solutions took the honours of Best Service & Maintenance Provider, thanks to their customer focused services, which saw Vue Entertainment benefit from a 24 hour real-time energy monitoring and maintenance bureau across 85 UK/Ireland cinemas. BG Energy Solutions were also successful in picking up the Energy Management Award for this project.

The Technical Innovation of the Year – Projects accolade was received by Enterprise Control Engineers for the City of Glasgow College project, where a Siemens Desigo system was installed, which provided significant energy savings.

The Siemens Building Technologies product Desigo CC claimed the title of Technical Innovation of the Year – Products, the innovative design and ease of use functionality of this integrated building management platform led to its success.

Eton Associates beat off strong competition in the Contribution to Training Award, for providing employees with a comprehensive training package which included the BCIA courses and sponsoring individuals to attain a degree.

Engineer of the Year was awarded to Stephen Astwood of Johnson Controls, whose years of experience, vast technical knowledge and willingness to go above and beyond made him a worthy winner.

George Belfield, of InTandem Systems claimed the winners award for Young Engineer of the Year, for his dedication and enthusiasm to training and the industry.

Outstanding Contribution of the Year went to Andy Bartlett of Belimo Automation UK. Presenting the award Malcolm Anson, President of the BCIA said: “I am delighted to present this award to Andy. He and his company have been members of the BCIA from the very beginning. Andy has been a key player in moving the controls industry forward and has actively supported the BCIA in many ways.”

Malcolm added: “I would like to congratulate all of the finalists and winners and a big thank you goes to all of the sponsors.”