BBES shows commitment to the next generation of engineers 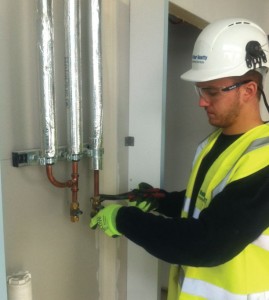 Balfour Beatty Engineering Services (BBES) has provided more than sixty people with craft apprenticeships since 2010, giving them the opportunity to become leading mechanical and electrical engineers.

The scheme, which provides training and development for the next generation of skilled apprentices, has seen 61 apprentices receive training with 15 placements since January 2013. Apprentices have the opportunity to work alongside fully qualified employees on some of the nation’s largest infrastructure projects, including major hospitals, universities and commercial schemes. These projects provide apprentices with training in a number of areas such as installing circuits, wiring, security, drainage, heating and ventilation and form the basis for their professional career.

Alastair Green joined in 1994 as a craft apprentice. He has since progressed to being a Labour Manager. Alastair said: “As Labour Manager, I ensure we recruit the best apprentices and develop them throughout their training to gain the knowledge and expertise to deliver our future projects.”

Balfour Beatty Engineering Services Managing Director Phil McGuire began his career as an apprentice and continues to be an ambassador for the programme. Phil said: “The apprenticeship programme is an excellent way to learn the skills of a mechanical or electrical engineer, supported by the academic course and hands-on experience. I began my career as a craft electrician apprentice on the Blyth Power Station in the North East. Since then I have held many roles on many projects and worked my way up to become the Managing Director of Balfour Beatty Engineering Services.”

Balfour Beatty has been invited to contribute to the Government’s new Trailblazer scheme as the electrotechnical lead. As part of this scheme, Balfour Beatty is developing new degree-level apprenticeships in Civil Engineering, Construction Management, Building Services Engineering and Quantity Surveying.