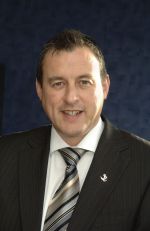 Paul Hardy, Managing Director of Baxi Commercial Division has been elected to the board of CIBSE which consists of seven officers (President, President-Elect, three Vice Presidents, Immediate Past President and Honorary Treasurer) and five elected members.

Paul has been with Baxi Commercial Division for 15 years and has over 30 years experience in the industry. An apprentice trained H&V Engineer with an HND in Building Services Engineering Paul worked for 10 years as an installer, four years as a design engineer and the last 17 years in manufacturing/sales of HVCA products.

“I am extremely honoured to be nominated for this position,” said Paul. “We at Baxi Commercial Division have always fully supported CIBSE’s activities, as we share their belief that the future of the industry lies in encouraging more talented young people to seek a profession in the engineering and building construction sectors. We also believe that those already in the industry have the responsibility of setting a standard in the development of low carbon solutions.

“As a Member of the CIBSE Board, I will work alongside all members of the Institution to promote innovative design of building services equipment and systems, which will be essential in reaching UK carbon emission reduction targets.”

Baxi Commercial Division has supported CIBSE for many years, through sponsorship of the Annual CIBSE Awards, regional dinners and events. Close involvement is also ongoing with CIBSE Young Engineers, including visits to the Baxi Commercial Training Academy in Birmingham and sponsorship this year of the very first CIBSE YEN Champions Award in addition to the CIBSE Graduate of the Year Award.