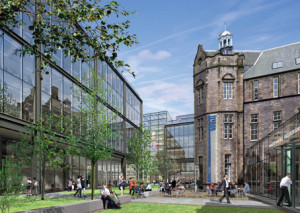 Balfour Beatty Engineering Services has been awarded a £5m contract to install mechanical and electrical services for a new office development at Quartermile in Edinburgh known as Q9.

The Q9 scheme is a seven-storey commercial building, part of the Quartermile development, one of Scotland’s largest regeneration schemes situated on the site of the former Royal Infirmary.

This project will achieve a BREEAM Very Good rating, the leading assessment method for sustainability in buildings, which will be achieved by using high-efficiency air conditioning plant and equipment, LED lighting and building control systems. The project will also introduce waste packaging initiatives to minimise waste to landfill.

Derek Sanders, Balfour Beatty Engineering Services’ Regional Director for Scotland, said: “We have worked with Sir Robert McAlpine to deliver several projects at the Quartermile site already and this latest award builds on a long standing and successful partnership. We will be utilising our state-of-the-art Modular Systems + off-site manufacturing facility to ensure maximum safety, best quality and program certainty on the project.”

Work is due to commence in June this year and is scheduled to be completed in spring 2016.