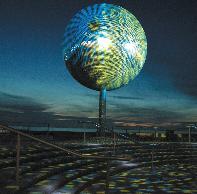 Three innovative products, 11 stand-out projects and a UK lighting designer were the outstanding winners at this year’s Lighting Design Awards.

Projects as diverse as the fabulous Hotel Puerta América in Madrid and a funicular railway in North Yorkshire were rewarded in an expanded-awards presentation that also saw Gary Campbell recognised as the Awards’ first Lighting Designer of the Year.

Campbell was rewarded for his craftsmanship and his consistency. “His projects are always well thought through and executed, with superb attention to detail and he has maintained very high standards from project to project,” said the judges. They also described Dagenham Civic Centre – the winner in this year’s Public Buildings category – as: “Frighteningly good”. Campbell was also commended in the Retail category for the personal shopping department at iconic London department store Selfridges.

Peterborough Cathedral, which dates to 1118, won the Heritage Lighting award for a scheme, designed by Lightmatters, that mixes metal halide and tungsten halogen lamps to retain a consistent colour appearance on the stone work, while achieving optimum energy efficiency. Roof uplighting – using metal halide sources – reveals the clerestory arches and narrow, linear beams of light highlight the columns throughout the interior. This combination enabled dimmable lighting to be used for service lighting and low energy lighting at other times.

The Flavin-esque Bough 1, at the Oxo Tower Wharf won the Special Projects award. A seasonal decoration created to attract shoppers to the Tower’s craft and design retail stores in the run-up to the new year, the installation by Simon Corder is inspired by the idea of a bough: “Like a broken branch from a fir tree, flaming”.

The Workplace category winner was BP’s new Canada Square facility – a 240,000-sqft office over six floors with a high specification that sets new standards for trading facilities and has become the current benchmark for BP. The facility, installed by MEIT Associates, has used new luminaire technology, especially developed for the project, pushing the boundaries of the present lighting guidelines.

The Mini showroom on Park Lane was the Retail winner. The lighting design, by dpa Lighting Consultants, emphasises the fun and quirky interior of the BMW Group’s Mini flagship showroom, echoing the Italian Job film. Discreet, adjustable recessed discharge downlights are arranged in a neat configuration to give flexibility for the ever-changing car displays and colour filters have been used to further enhance the Mini identity.

A private residence in London SW3, transformed by John Cullen Lighting into a stunning contemporary home and a dramatic showcase for entertaining, won the Residential award. Layering low voltage, mains voltage and fibre optic light sources allowed the lighting to provide the background atmosphere while respecting the traditional architectural layout in a project which the judges described as: “Classic residential lighting which complements the architecture”.

Lighting at the new south promenade in Blackpool created not just a new icon for the Blackpool Illuminations but the Exterior Lighting winner. The Mirror Ball, installed by Blackpool Illuminations, was seen as the perfect canvass for a lighting show that includes lighting directly onto the ball, wandering onto the arena surrounding it with colour changes, effects and gobos phased in and out.

Private members’ club Fifty scooped the Lighting for Leisure award, with very different lighting approaches by Lighting Design International, for its different areas. The gaming floor was particularly challenging, with over-sized pendants above the tables plus glare-free play and even lighting for the CCTV monitors required. The pendants incorporate downlighters, ambient lighting and cameras, suspended from two beams running the length of the room.

The funicular railway cliff lift at Saltburn-by-Sea was judged the best Transport entry. This scheme was asked to express the pier funicular cliff lift and associated buildings in a connected way. Lighting Design and Consultancy’s design for the cliff lift is lit as a silhouette against a brighter background and the funicular as a bright feature against dark cliffs, with a blue light to illuminate the track as a visual reference to the water that drives the lift power mechanism.

The Old Man of Storr in Trotternish on the Isle of Skye became the centrepiece for an extraordinary night time event as an average of 200 people nightly took the midnight walk to the spectacular rock pinnacle. The Storr forest, cliffs and corrie provided the backdrop for a subtle and imaginative light and sound installation by Dave Bryant, that the judges gave top prize in the new Entertainment category.

The Interior Luminaires winner was the UM1 Meso Optic from Etap Lighting. Developed for use with its UM series of luminaires, at the heart of the Meso Optic is a holographically-generated optical film which is just 5nm thick. The film is bonded to either a polycarbonate or pmma substrate for mechanical strength and the combined efficiency of the film and substrate is 92%.

The Bega 2441 & 2442 vertical surface illuminator from Zumtobel Staff Lighting won the External Luminaires award for wall-mounted washer luminaires designed to project light across large wall surfaces. A three-way optical system allows designers to use focused illumination or diffuse light to dramatic effect without having to utilise light sources located at a distance from the structure or pole-mounted equipment.

CosmoPolis from Philips Lighting generates a warm white light with high energy efficacy, combined with miniaturisation and optical performance for outdoor lighting and won the Light Sources and Control Gear award. Philips has given the products its Green Flagship status because of the equipment’s energy efficiency, long lamp life, and low weight/size plus low use of hazardous materials.