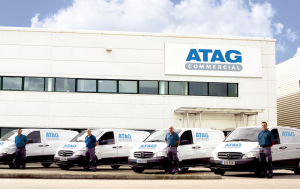 Following a company restructure, ATAG Commercial has relocated to new UK headquarters in Basildon, Essex. The move follows the acquisition of ATAG by the Ariston Thermo Group, which already bases a number of its UK companies from the same South Essex offices.

ATAG Commercial will continue to supply the company’s exemplary Q Series and powerful XL Series of commercial units to the market. In addition, the highly popular A Series of high-end boilers will form a key part of the company’s activities in the new build sector. All models have proved to be highly successful throughout the UK for many years, blending manufacturing expertise and unmatched reliability.

Following the relocation, all commercial and domestic new build contract enquiries should be addressed to:

The nationwide sales team will remain unchanged, with all enquiries for existing and future ATAG Commercial orders to be directed through the usual channels.

Commenting on the company’s change of premises, Paul Martin, Business Development Manager at ATAG Commercial said: “This is an exciting time for ATAG Commercial, especially as we have the backing of a world leading manufacturer in the Ariston Thermo Group. Our change of premises is going to be a great benefit to us, as it improves logistics, while enhancing after sales and technical backup.”

Paul continued: “Of course, we’ll maintain the highest possible levels of service standards, which are attributes our customers have come to expect from ATAG Commercial. We’re also committed to cementing our position in the UK and will be developing our offering further over the next few years.”