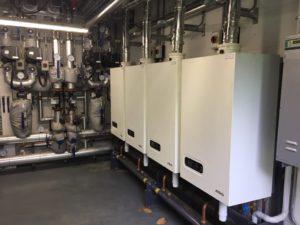 Four XL Series boilers from ATAG Commercial have been installed as part of an extensive refurbishment of the Botanic Gardens Tropical Ravine, a listed building located in the heart of Belfast. Three XL140 and one XL70 were fitted in cascade at the unique venue, which is home to many tropical and native plants. The new boilers were installed in June 2017, with the entire refurbishment being completed and opened in May 2018.

The Tropical Ravine management was aware the heating system had become old and inefficient, so contacted Belfast-based Hanna Mechanical Services to investigate a means of improving the situation. The company carried out works to a newly formed plantroom, which included a network of stainless steel pipework supplying low water temperatures to emitters in a hypocaust to achieve the tropical environmental conditions required. Rain water harvesting equipment was also installed, in order to recirculate water to the internal plumbing for ponds and the venue’s ‘mist system’. When it came to selecting the gas boilers at the heart of the application, they turned to ATAG Commercial and the XL Series.

Commenting on this decision, Glenn Coburn, Contracts Manager at Hanna Mechanical Services, said: “We’ve used ATAG Commercial’s boilers on many previous projects, due to their great build standards and high quality cascade capabilities. Installing them at the Tropical Ravine should not only prove more economical in terms of lower fuel bills, but should also result in significant energy savings when compared to the previous boiler plant.”

The Botanic Gardens Tropical Ravine contains some of the oldest seed plants around today, as well as banana, cinnamon, bromeliad and orchid plants. It was built in 1889 by the park’s then head gardener, Charles McKimm, and his staff. The Ravine shows how technology allowed gardeners to cultivate unusual species in a greenhouse environment. Features of interest include a plant-filled sunken glen, flowering vines, tree ferns and leaf silhouettes.

ATAG Commercial, which is part of the Ariston Thermo Group, is a manufacturer of gas fired condensing boilers suitable for a range of domestic and commercial applications. Other models in the range include the exemplary A Series of domestic boilers and powerful XL Series of commercial units. All models have proved to be highly successful throughout the UK for many years, blending manufacturing expertise with unmatched reliability.