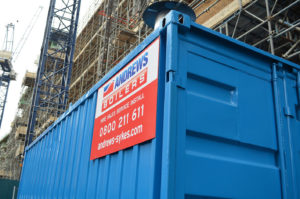 Temporary hire of a 1,500kW boiler from Andrews Boiler Hire ensured that a new property development would continue to receive heat and hot water despite a breakdown in the local district heating system.

The problem arose as several local authorities in East London embarked on a construction project that would create additional housing in an attempt to solve the ever-increasing demand for affordable housing.  When the new properties where added to the district heating system, one that was already operating close to capacity, three separate 500kW modules eventually broke down under the increased load.

It was imperative to find an alternative heat source to support the existing system, enabling faulty units to be taken offline for servicing, replacing if necessary.

With one of the largest boiler hire fleets and an extensive network of depots the boiler division of Andrews Sykes was an obvious choice to supply a workable solution.  It could respond extremely quickly to prevent further disruption to the Local Authority’s district heating system.

Contacted by the area’s energy supplier who sought a temporary rental solution, engineers from Andrews Boiler Hire conduct a thorough survey of the site.  The decision was supply a high capacity 1,500kW containerised boiler which was then connected to their existing system.

Due to the location of the client’s premises, it was recommended that a 9000-litre fuel tank was skated inside the main plant room to prevent it from being stationed next to a relatively busy road.  This ensured the temporary system was kept behind closed doors while anti-vandal doors and a heavy duty padlock guaranteed the equipment’s complete safety while on hire.

In recent years much of Greater London has benefitted from regeneration projects as local authorities endeavour to provide additional accommodation.  As a result, newly-constructed residences can impact the requirements of the local community, particularly if using a centralised districted heating system that is running at near capacity.  In East London, as the new properties were added onto the district heating circuit, the increased strain eventually resulted in a slowing of its effectiveness in suppling heat and hot water.

The 1,500kW rental boiler and fuel tank, supplied by Andrews Boiler Hire, remained in place for a number of weeks, allowing decommissioning of the faulty units for overdue repairs.  It was only taken offline once the previously broken units had been serviced or replaced and reconnected.