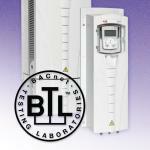 The ABB standard drive for HVAC, ACH550, has become the first variable speed drive to receive the new European BACnet certification.  The drive has been approved and listed by BACnet Testing Laboratories (BTL) as meeting the updated BACnet standard ISO 16484-5:2007.

“ABB’s standard drive for HVAC was the first BTL approved drive, back in 2005, and is now the first BACnet certified drive. During that time ABB has delivered some 20,000 such drives for BACnet installations worldwide,” says Steve Ruddell, General Manager for ABB, drive, motors and machines. “This shows our leading position when it comes to building automation and BACnet integration. Furthermore, it proves that the ABB standard drive for HVAC will run smoothly with equipment from other manufacturers.”

The BACnet certificate is European proof of BACnet conformity, complementing the BTL mark. The BTL mark remains the international uniform symbol for BACnet conforming products, ensuring that the device meets the BACnet standard. The certificate ensures that the testing process has been carried out against a valid BACnet standard by an accredited testing laboratory; and that the functionality of the product is as described by the manufacturer.

The rising number of devices using BACnet and growing applications for these devices has made it necessary to provide reliable information on the functionality and interaction of devices to ensure that they perform at a high level. To meet this need, the manufacturers’ association, BACnet Interest Group Europe (BIG-EU), has introduced the new certification process.

To achieve certification, the ABB drive had to pass the BACnet Standard ISO 16484-5:2007 conformity test. The approval gives reassurance that the ABB standard drive for HVAC meets the valid BACnet standards and will operate successfully with other BTL listed devices. ABB is one of 14 manufacturers whose products have been tested and certified within the first European certification round.

“ABB has supported the interoperability and development of the BACnet protocol for a long time. The BTL approval and BACnet certification demonstrate that ABB follows the BACnet standard and its latest implementations,” says Ruddell.

BACnet is designed specifically to meet the communication needs of building automation and control systems. It is an open system and no cost is associated with its use. BACnet replaces gateways and hardware with one language, able to work in real time. It gives users the freedom to select the most suitable equipment from a range of manufacturers. Equipment using BACnet is integrated without effort and gives more comprehensive information than other communication technologies when in use. BACnet can be used to fully integrate the building management system with the heating and ventilation system, fire alarm, intruder protection and other systems in the building, from field level up to management level.