New boilers and water heaters supplied by A.O. Smith have helped reduce fuel bills by up to 25% at Queensbury Academy in Dunstable. 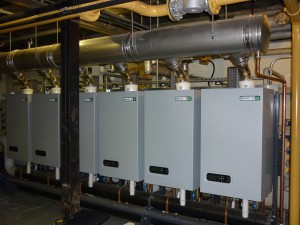 Seven Upsilon boilers and two high efficiency BFC water heaters were installed as part of a refurbishment program at the school which has almost 1,200 students. The school occupies two main buildings, and upgrading the facilities in the west block of the school resulted in a considerable reduction in gas usage compared with the east block.

The system was designed specifically to deliver cost savings for the school. In the boiler house serving the gymnasium area Luke Biswell from CME Heating installed an A.O. Smith Upsilon 70kW model and a gas fired BFC water heater. The old system in the west block of the school which dated from 1992 consisted of six boilers split into three systems with two boilers per zone and a direct fired water heater. Luke Biswell replaced these with six new Upsilon 140kW models on a common header with modulating valves to each zone. As well as being easy to install these take up less than half the space of the old system. A further BFC 60 water heater from A. O. Smith completed the system in the main block.

Tony Cella, the Site Manager for Queensbury Academy was impressed with the quantity of condensate produced by both the BFC water heaters and Upsilon boiler even when they are running above 55oC. He said: “The top firing burners of the water heaters and the ultra-low level of modulating burners contribute to maximum levels of heat reclaim from the flue gases, and when running at lower temperatures a steady stream of condensate is flowing most of the time.

“Performance and economy is where I feel the Academy will see most benefit – morning start up time is down to about 20 minutes even on the furthest circuit in the block. Traditionally it took over an hour to achieve working temperatures, but the new boilers soon modulate down to a lower rate for the rest of the day. Combined with new BMS controls initial indications are that we’ve greatly reduced our gas consumption. When compared to the east block, the newly refurbished system in the west block indicates a 25% saving on gas consumption.”