A material question – the debate goes on 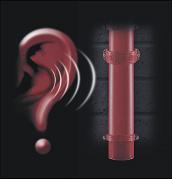 It is a debate that continues and any number of expert witnesses will come forward to put the case for their favoured material for above ground drainage systems. However, where the basis for judgement is open to interpretation, we are often asked to rely on opinion rather than fact.

The four main contenders – cast iron, stainless steel, HDPE and PVC systems – each have their proponents, but setting aside judgements which involve a greater or lesser degree of partiality, the only basis for a sound decision is hard incontrovertible evidence.

When considering the case for cast iron, there is a growing library of independent reference material that provides ample evidence for its merits in large scale building projects. Take, for example, the key issue of fire resistance. Through the successful Burning Question campaign – captured on CD, cast iron was proven to be the safest option, and brought under the spotlight in particular the failures of the intumescent fire collars used by all the plastic-based systems tested at an independent laboratory to deploy. The disturbing outcome, in the particular case of HDPE was to spread fire through molten droplets downwards to the floor below the fire compartment.

Noise in drainage systems is another key issue and one which is now being tackled by a new European standard BS EN 14366:2004. Building regulations document E, and Code of practice BS8233:1999 (Sound insulation and reduction for buildings) does not cover the requirements for wastewater systems so there has been some ambiguity in the claims made by various materials. The new European standard, on the other hand, sets down a method for laboratory testing and it is only under these conditions that a true comparison can be made.

The evacuation of waste, soil and rain water naturally generates airborne and structure-borne noise passing through the pipe work and system vibration coming from seals and supports. BS8233: 1999 provides guidance for minimum noise requirements by building type and methods of sound insulation to reduce levels and should be used in conjunction with manufacturers’ tests results to BS EN 14366, which specifies the methods for the laboratory measurement of airborne and structure-borne sound produced in wastewater and rainwater installations.

The Saint-Gobain Pipelines’ Ensign system was the first drainage system to be tested to the new standard and when fitted with acoustic dampeners to the standard ductile iron brackets, the noise level recorded was as low as 11dB at a flow rate of four litres per second generated through the system. Comparisons made against the best HDPE system showed cast iron was up to 10dB quieter and more than 6dB quieter than twin-walled PVC. Further independent tests carried out by acoustic engineers in Australia compared cast iron to PVC and stainless steel in a different test scenario, resulting in cast iron being found to be some 13 – 14dB superior in acoustic qualities.

Where there are standards to which materials can be independently tested, the results are incontrovertible. On other issues, judgement can be somewhat more subjective and perhaps the most hotly argued question is cost, including the cost associated with the time taken to install a system. It has been claimed that stainless steel push-fit systems are the fastest and easiest to install on site, and promote considerable labour savings over cast iron. Many respected plumbing installers who install a variety of materials say there is little difference between any of the systems to install on site. However, when you consider that cast iron is on average 20% lower in material cost to that of stainless steel, those installation savings have to be found, to even match cast iron. That’s even before you include the ‘add-ons’ like brackets, acoustic insulation etc.

The traditional view was that cast iron is less competitive than other materials based on installation time. However, independent research undertaken by the leading UK quantity surveying partnership EC Harris exploded this myth by stating unequivocally that BS EN 877 systems make cast iron drainage a competitive option. An on-site work measurement study looked at the installation of lightweight cast iron systems and found the time needed to be far less than the old BS systems and also highlighted other advantages that needed to be brought into the equation. These included less bracket supports needed than any of the four materials, a fact identified in BS EN 12056 – part 2, no fire collars, no expansion joints and thermal limiters, no sound insulation and not forgetting far greater longevity, and fit and forget peace of mind.

Although the labour costs associated with installation have to be taken into consideration on a project-by-project basis, they differ widely and whilst they do impact on the total project cost, this can have a variable effect. Cast iron rates quoted in Spons (price guide) have been checked to BS 3138 and recent on-site research with a plumbing installer using cordless power drills with mechanical joints has been proven to reduce the time taken to install the mechanical couplings a further 60%, increasing competitiveness even more.

Cast iron systems using simple to install ductile iron mechanical couplings offer a flexibility and performance which cannot be matched by other materials. Typically, the standard ductile iron coupling will withstand up to 5 bar accidental pressure (up to 150mm in diameter) suitably restrained, compared with the stainless system which requires over-clamps on each push-fit joint as well as brackets – to achieve only 3 bar pressure adding considerable cost and labour time.

Although cast iron is regarded as a traditional material, cast-iron systems are constantly evolving to meet the demands and requirements of today’s plumbers. Year on year, new fittings are being introduced to systems to increase flexibility and provide the installer with more options. In the coming months a new push-fit range will be launched on the market to provide the installer with even greater choice with cast iron to BS EN877 truly making installation of cast iron drainage systems a piece of cake.

Cast iron is also being used for off-site fabrication for a number of major projects with, for example, Swift Horsmann favouring cast iron Ensign for their Podwall brand prefabricated units. Pre-assembled in Scotland, units have been shipped down to the London Bankside project. The company prefers cast iron for its strength, the flexibility and durability of the couplings – and the fact that they can walk on units during installation. Lighter-weight counterparts lack this strength to withstand on-site ‘abuse’.

For many M&E consultants working on major public and private sector schemes, cast-iron systems are virtually self-specifying because of their superior qualities, with fire resistance topping the list. With diameters from 50 to 600mm, unmatched acoustic qualities, competitive installation costs and a proven life expectancy that far outreaches any rival – there are no other materials that can out-perform cast iron. When it boils down to cost, all these factors need to taken into consideration. Comparisons should be backed up by credible third party evidence, products should be Kite marked to a standard, and installation rates should be right up to date.