Antoni Sapina Grau of Brunel University and WSP Parsons Brinckerhoff, and TÜV SÜD Wallace Whittle have been awarded the coveted Graduate of the Year award and Employer of the Year award at the Chartered Institution of Building Services Engineer’s Young Engineers Awards. 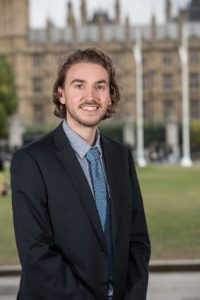 Antoni Sapina Grau (pictured) was crowned Graduate of the Year for his presentation on problem solving with technology, after facing off against eight other graduate hopefuls giving five minute presentations on the theme of ‘Computers and digital technologies are transforming the way engineers work. What impact do you think this is having on innovation; professionalism; and traditional engineering skills?’

Antoni will now receive the first prize of a trip to the ASHRAE Winter Conference in Las Vegas, with the two runners-up Katie Ewing of Atkins and Scott Mason of Lochinvar receiving cash bursaries from the Rumford Club, while the Manly Trust presented cheques of £100 to the other finalists.

The Young Engineers Awards recognise excellence both in young graduates themselves, and the employers who are working to encourage young talent. The Awards seek to reward the innovative thinking, hard work and skill that is necessary to secure a bright future for the built environment.

John Field, President of CIBSE, said: “The Young Engineers Awards are a powerful force in encouraging the best and brightest, taking young engineering talent and challenging them to address some of the industry’s biggest issues to benefit humanity.

“This year’s competition has been extremely tough, and the industry is clearly in good hands with such an able crop to take it forwards. What is most important now is that we nurture that talent and ensure that we support our young engineers early on in their careers, and help them to have the best possible start in their professional lives.”

This year’s Young Engineers Awards were presented at a glittering ceremony at IMechE’s headquarters in London, in which the prospective Graduate winners gave short presentations to the judging panel. This was followed by the annual ASHRAE Presidential Lecture given by the Society’s President Tim Wentz visiting from the US.

The awards are supported by three leading international engineering institutions – CIBSE, American Society of Heating, Refrigerating and Air-Conditioning Engineers (ASHRAE), and the Institution of Mechanical Engineers (IMechE) and is sponsored by Andrews Water Heaters, Ruskin Air Management and Waterloo Air Products. It is also supported by the CIBSE Patrons, a group of businesses who collaborate to give financial and technical backing to CIBSE. 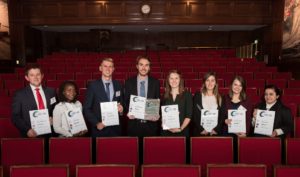